Arrested for Identity Theft: What Charges Will I Face? 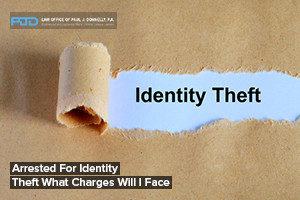 Identity theft is a broad category of the law that can include everything from stealing a person’s identity to taking personal information and even hacking someone’s social media account.

The consequences of identity theft are just as broad as the category. The punishment depends not only on the type of data stolen but how that data was used. But, unlike other crimes, being convicted of identity theft could be extremely costly.

Criminal Charges in the State of Florida

The penalties for identity theft can vary and a few factors will determine the severity of your punishment, including:

• How many people you victimized;
• The number of damages you caused;
• If you have been arrested or convicted of identity theft before.

You Have to Pay Restitution, Too

Spending time in jail and paying court fines is not the only punishment you will face. You may also have to pay restitution to your identity theft victims. If that victim chooses to sue you for personal damages, then a guilty conviction could make it easier for that victim to win their civil lawsuit—and you could pay back more than just what you stole.

If you were arrested for identity theft involving the elderly or dependent adults, then be prepared for harsher penalties. The state of Florida does not take identity theft crimes against elderly individuals lightly, and you could be charged for a higher class of crime for stealing just one identity.

Consult an experienced criminal defense attorney in Miami who can fight for your rights and the best possible outcome. The Law Offices of Paul J. Donnelly are experienced in white collar crimes and can assist you with your case. Don’t risk going to prison—get the defense you deserve. Call now for a free consultation regarding your case.