What is Automated Robbery? 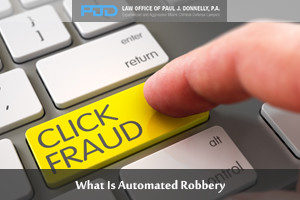 At one time in the past, you could only find ATM machines on the premises of financial institutions. Today, this has changed considerably. Now, you can find an ATM machine, just about anywhere – in shopping malls, airports, grocery stores, corner store, gas stations, night clubs and even casinos.

You can even find mobile ATM machines set up in temporary venues where entertainment or events take place such as fairgrounds or disaster sites.

Are ATMs Really Convenient? Customers of financial institutions may like the idea of being able to access their funds at any time. However, this also poses security issues. To some extent, customers have traded in safety for the convenience of access.

ATM machines located off the premises of financial institutions are more profitable than the ones on bank premises. Why? They attract a lot of people who don’t have an account with the bank; therefore, the service fees charged to non-account holders serve as income for the bank.

Additionally, safety is an issue for customers who use off-premises ATM machines. Most people who use these machines increase their risks for robbery.

In some instances, the ATM machines located in retail stores or grocery stores are owned or leased by the operator and so this profits the retailer or grocer more than it does the bank. This is also the ideal hang-out for robbers.

As long as ATMs have been around, skimming or automated robbery has been in effect. What is skimming exactly? Robbers use pre-fabricated cards that look exactly like a bank card to read the magnetic stripe on the victim’s ATM card or credit card. Sometimes, they will even make a record of what the victim punches in the ATM machine when asked for their PIN number.

For decades, skimming has proved to be a big problem. Now, it is getting worse. According to a report published by the USA Secret Service, the skimmer’s average net amount in 2010 was $30,000 for each incident. In 2011, it was a whopping $50,000 per incident according to the same report.

The U.S. credit card is of a low technology nature; therefore, skimming is easy for unscrupulous robbers. In fact, credit card technology has not changed for nearly 50 years, so the robbers are catching up and learning how to manipulate the magnetic stripe on both debit cards and credit cards.

The U.S. Needs to Play Catch Up

The ‘chip and PIN’ technology has lessened the number of skimming incidences in Europe, but the United States is a bit behind. Only now are we beginning to see credit cards with chips.

A Word of Warning

Oftentimes, customers of different financial institutions are robbed while withdrawing money at an ATM. In some severe cases, an individual might even sustain injuries if a robber chooses to be violent.

Be aware…Make sure you have someone with you at all times. A robber will approach one person, but will think twice about approaching two or more persons.

If you have been a victim of an ATM robbery and you need proper representation to arrest the robber, contact an experienced and reputable attorney.