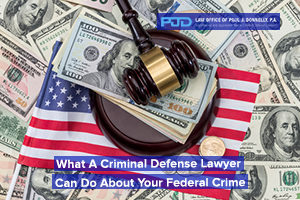 When you think of a federal crime, you probably think about drugs, trafficking, and even gun-related crimes, including illegal gun sales.

Some states have “looser” gun laws than others. For example, Florida is one state that is known for having relatively “loose” gun laws.

If you legally own a gun in the state of Florida, then you might feel like there is a controversy surrounding the state’s gun laws.

For example, although Florida typically leans towards gun rights and protection of the second amendment, there are also some very strict gun crime laws throughout the state.

Florida has a very high number of people who own a gun as well as high numbers of official gun dealers. Regardless of whether you own a gun legally, illegally or you are a gun dealer, it’s important to understand how the rules of the state can impact your rights.

If you’re accused of perpetrating a violent crime while using a gun, a conviction could haunt you for years to come. You need an experienced Miami gun crimes attorney who will do everything possible to prepare your case, talk to you about what you can expect, and even keep you informed as your case progresses.

If you are caught and arrested for illegally selling guns, then this is considered a federal crime—and federal crimes come with harsher punishments.

In fact, the state of Florida comes in second place for the crimes traced to illegal gun sales.

Many lawmakers believe that if Florida tightened its gun laws that this would prevent gun-related crimes. But this goes against Florida’s already liberal gun-related laws, doesn’t it?

In fact, despite this fact, Florida is currently working on loosening gun laws.

Check out this site here to read more about working with a federal criminal defense lawyer.

There are several common types of gun crimes that we typically see in Florida. The majority of these involve not having the proper permit to carry the weapon or using a gun while committing a crime, which include:

Florida has a law known as 10/20 life. This means that there are mandatory sentences when a gun is used while committing a crime.

Read more about the 10/20/Life laws in Florida here.

Florida’s gun culture is so unique that a recent study by reveals that there are 3.2 times the number of nationally licensed gun dealerships in the state when compared with post offices.

This contributes to an additional statistic which is that more than 99% of Florida residents live within several miles of a firearms store.

Because Florida gun laws afford multiple opportunities to carry a gun and even to use one in self defense, there are also strict sentencing guidelines if you were not carrying or using your gun under the requirements of the law.

This often leads to confusion, which can lead to individuals being charged for gun crimes—even when they don’t realize they have committed a crime!

Although the state of Florida may seem relatively friendly towards gun ownership and gun rights, it is important to understand that the law also takes any violation quite seriously.

It’s easy to feel overwhelmed when you face charges for a gun crime, but you don’t have to feel this way. Working with the right gun crimes attorney is one of the best things you can do for your own future.

You need to consult with a knowledgeable criminal defense attorney any time that you have been accused so as to minimize the chances of facing serious penalties. Do not hesitate to get legal advice sooner rather than later.

Visit here to learn more about working with an experienced federal crime criminal defense lawyer in Miami, and how working with the right attorney can make all the difference in your case, in dealing with your charges, and protecting your rights and future.