Top Things to Take Away from the PA Frat/Facebook Scandal 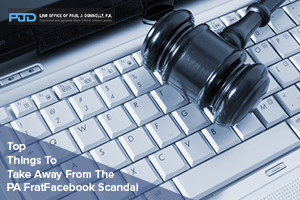 It’s hard to watch the news without seeing some mention of what is going on at Penn State. A fraternity was recently suspended for allegedly using Facebook to post photos of women who were unconscious and/or nude. While these Facebook pages were set to private – meaning the entire public could not see – there were plenty of people who had access, saw, and reported the violation.

The fraternity of Kappa Delta Rho has been suspended for one year as of right now. But, there is an investigation pending by the police that could result in more than just a frat suspension; it could mean arrests and jail time.

A victim of these nude and unconscious photos saw her own photograph on a member’s Facebook page. She then saw that other women who were fully or partially nude were posted on the private Facebook page as well. There were also photos of drug use and hazing.

The pages were wiped clean before the warrant went through, but the authorities were still able to uncover 20 printed images that were also on the Facebook page before it was erased. The Facebook pages have also been shut down.

Could The Frat Boys Be Arrested?

Yes and no. Police do have an active investigation and there may be arrests within the coming weeks. One of the biggest things is that these boys invaded the women’s privacy.

It is illegal to post a picture of any one without their knowledge or consent. That is because if someone is in a private place such as a bedroom, they have an expectation of privacy.

KDR’s attorneys are arguing that the girls had no expectation of privacy when they passed out at a fraternity house.

But, the fraternity members are still violating Section 2 of that same statute, which makes it illegal to take photographs of a person’s private parts without their consent or knowledge, regardless if they are in public or private.

While most of the girls in the photographs have not been identified, if any of those women are under the age of 18, the fraternity members could also be arrested and charged with child pornography.

If you or a loved one was arrested for a fraternity prank that is leading to sex crime charges, you need an experienced Miami criminal defense attorney. Contact the Law Office of Paul J. Donnelly, P.A. today for a free consultation. A conviction could ruin the rest of your life; so you need to fight aggressively to maintain your freedom and your reputation.