The Top 10 Criminals in the World 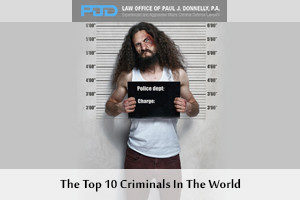 While crime doesn’t pay, sometimes, it does make you famous – or, infamous. Below are ten of the most notorious criminals in history.

Perhaps one of the most notorious still-living criminals of our day, one-time singer-songwriter Charles Manson is held responsible for forming the quasi-commune “Manson Family,” which carried out seven murders in two days.

Thought to be responsible for the Saint Valentine’s Day Massacre of 1929, gangster, and crime boss Alphonse Gabriel “Al” Capone was convicted of tax evasion and served a prison sentence that spanned both the Atlanta U.S. Penitentiary and Alcatraz. Although he was paroled in 1939, Capone spent the last years of his life suffering from late-stage syphilis and eventually died from a heart attack and stroke.

Ted Bundy was an infamous serial killer, rapist, kidnapper, and necrophile. Although he finally confessed to 30 murders committed in seven states in the mid-to-late seventies, the number of victims is thought to be much higher.

Responsible for the Oklahoma City bombing which killed 168 people and injured more than 600 others, Timothy McVeigh was put to death by lethal injection on July 11, 2001.

This deadly duo of American outlaws was gunned down after their blaze of robberies and murders during the Great Depression era.

Another American outlaw, Jesse James, was an infamous train robber (among other gang-related crimes) in the mid-to-late 1800s. Although he’s regarded as some as a sort of Robin Hood who robbed from the rich and gave to the poor, there’s no evidence that James or any of his gang let go of their loot.

Also known as “The Unabomber,” Ted Kaczynski is regarded as a mathematical genius who is responsible for sending deathly explosive packages to people he believed were enemies of Mother Nature, including college professors and computer sales people.

Also known as the Milwaukee Cannibal, Jeffrey Dahmer, who was diagnosed with borderline personality disorder, is known for committing some of the most heinous crimes, including rape, murder, necrophilia, and cannibalism. Dahmer received life in prison but was soon after beaten to death by a fellow inmate in the mid 1990s.

This serial killer terrorized California in the 1960s and 1970s, and although all leads have led to dead ends, his case remains open with the California Department of Justice to this day.

As the founder and former leader of al-Qaeda, Osama bin Laden was held responsible for the deadly September 11, 2001 attacks on the United States Word Trade Center. He was never given a trial for his role in the attacks; rather, a United States special forces military unity – informally known as Seal Team Six – raided bin Laden’s compound ten years later in 2011, killing him and burying him at sea within 24 hours of his death.

Do You Need a Criminal Lawyer in Florida?

Have you been charged with a criminal offense in Florida?

The experienced and aggressive Miami criminal defense attorneys at Paul J. Donnelly, P.A. are here to help. We have experience with criminal defense cases on both the State and Federal levels, from drug trafficking and identity theft to gun crimes and domestic violence – and everything in between.

Visit website or contact Paul J. Donnelly, P.A. at 305-757-3331 to discuss about your case. Serving Miami & throughout Florida.

Review us on Cornell | Nolo | Justia.