Taxi Cab Driver Killed in Shooting off I-95 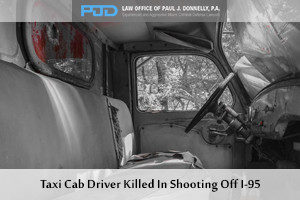 As criminal defense attorneys in Miami, we’ve seen a number of crimes ranging from drug crimes to sex crimes to even shootings…like this one. A taxi cab driver was shot and killed in a shooting in northwest Miami-Dade county on I-95.

On Monday morning, September 28th, a taxi cab driver was killed in a police-involved shooting, which shut down I-95 for several hours. Police originally responded to the accident scene when they received a report of a crash that involved a taxi cab on the southbound entrance ramp of I-95.

Soon after the police arrived, the taxi cab driver got into a conflict with one of the police officers, which involved the driver biting the arm of a police officer to the point where he had to discharge his firearm.

No one is sure why the taxi cab driver felt the need to flee from the police, but the recorded 911 tapes served as evidence of the altercation between the driver and the officer.

As we mentioned above, crimes in Miami can range from misdemeanor to some pretty serious federal charges, depending on the nature and case. This shooting, for example, is similar to a crime we see in the movies!