Is Ultrafest Miami Too Prone to Crime? 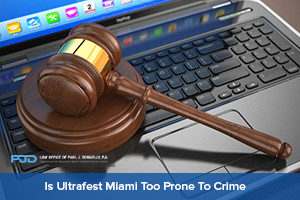 Ultrafest has become a major event in downtown Miami. However, many local downtown residents and business owners have found the annual electronic music festival to be dangerous.

While the festival is a very popular concert event, it has also a reputation as a hotbed for crimes in Miami.

This year’s Ultrafest featured a particularly unfortunate set of events, culminating in a security guard being critically injured when a group of fans who did not have tickets stormed a security fence..

The Miami Police Say the Festival Could Have Prevented The Injury

The Miami Police Department had warned Ultrafest organizers that one area of security fencing was vulnerable to a rush of fans.

Organizers added a second layer of traditional chain link fencing, but did not add any other fencing supports that might have been stopped a mob of people from surging through the fence.

As a result of what apparently was insufficient fencing for crowd control, a group of unruly fans stormed the fence, knocking it down, and then stampeding a 28 year old female security guard. The guard had to be hospitalized for a fractured skull and a broken leg.

In the wake of this terrible accident, the Miami Mayor has called for the concert event to be ended for good. The Miami Police Department receives numerous calls from residents and business owners about disorderly conduct and suspected drug use by event patrons.

Some businesses claim that they have to hire additional security to protect their businesses from the attendees who act reckless in the downtown neighborhood where the festival occurs.

Is Ultrafest Miami Worth the Crime Associated with It?

The tragic injury of the young security guard, as well as the death of a man found near the festival, has led some in the city government and business community to claim that Ultrafest is not worth the additional business it generates through tourism and ticket sales.

According to festival organizers, concert attendees contributed $40 million to the Miami-Dade economy in 2012. The three-day event also supports an estimated 915 jobs.

As noted above, the mayor of Miami, as well as some other city leaders, find that the festival has gotten out of control. The festival has had a reputation of significant drug use as well as crime, but the latest injury to a festival security guard apparently was the last straw for the mayor.

If you or someone you know was arrested in or around Ultrafest for drug use or some sort of other criminal activity, be sure to obtain legal counsel sooner rather than later.

The sooner you obtain counsel from an experienced Miami criminal lawyer, the greater chance you will be able to protect your legal rights with the police as well as in court in front of a judge.

Contact the criminal law professionals at the Law Office of Paul J. Donnelly at 305-757-3331 for help in your criminal case.