Identity Fraud Arrests Up in the State of Florida 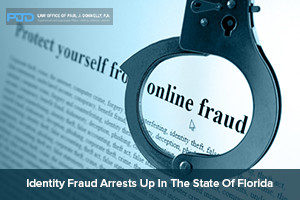 Less than one month ago, the federal government arrested 42 people in an identity fraud scheme that included names, birth dates, and Social Security numbers stolen and used from more than 1,000 people. The arrests occurred in Miami and followed a ring of participants all in South Florida.

Strangely enough, the investigation began because a local police officer reported that his identity was stolen and actually used to get unemployment benefits from the state.

The defendants were arrested in mostly Miami-Dade and Broward counties. Combined all of the people tried to about 21.7 million dollars in benefits through the use of false identities.

Out of all of this $3.2 million dollars were actually paid out to the people who reportedly stole these identities. The types of theft have gone beyond tax refund fraud and included credit card, debit card, unemployment benefits, and Social Security fraud.

The list of information was obtained by buying it from medical offices, hacking human resource departments, schools, restaurants, and more. These identities numbered in the tens of thousands and included a number of people that did not know their information was at-risk in the first place.

It is reported that the head of the Florida Department of Economic Opportunity says that fraudulent unemployment and insurance benefits “have reached crisis levels.”

This federal crime of identity theft holds a severe punishment but the burden of proof lies on the shoulders of the prosecution to prove. The names of these defendants were released by the state prosecutors and the media, including nationwide print and online media, has reported on this story. These people are not guilty until proven so in a court of law.

According an article published by USA Today, it was found that Florida was one of states with the highest incidence of identity thefts in the country. In the year of 2014, data theft was higher than ever before.

The article reports all forms of fraud, including identity theft, cost Americans almost 1.7 billion dollars in 2014. This averages out to being about $2,000 for every case of identity theft.

If you have been accused of identity theft, immediately seek the counsel of the legal team at Paul J. Donnelly, P.A. You deserve superior legal representation when it comes to the defense of your rights and case in a court of law. Schedule a free consultation today by phone at (305) 757-3331 or learn more about our team online.