How Does Bail Work? 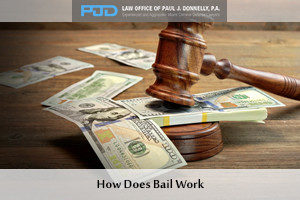 The Bail Act directs that “any individual, irrespective of his financial status – shall not pointlessly be imprisoned, when imprisonment serves neither the public interest nor the end of justice.”

What is the Purpose of Bail?

The key purpose of bail is to make sure that an accused individual will return to court in case he or she is released from jail before the trial date. Individuals who are arrested on petty misdemeanor offenses and any other non-violent felony offenses are normally released from detention through a pre-trial supervision service or on their own recognizance.

Nonetheless, when an accused is detained for a serious, violent or even repeat offense the authorities may deny him or her their freedom until after the trial. In these situations, bail is set at an amount adequate to ensure that the accused individual will return to court for their hearing.

The Bail Act states commitment to avoid needless and prolonged incarceration before trial. Local, state, and federal authorities often set bail without considering the personal circumstances and characteristics of the suspect.

Poor individuals may serve more time in detention than wealthy individuals, simply because they do not have enough funds to post bail. The wealthy among us can effortlessly withdraw $20,000 in cash just to post bail. But thousands of people accused of crime can barely afford to pay even half that amount.

Also Read : Do I Need a Lawyer If I’m Charged With a Crime?

If the accused does not have enough money to pay bail, he or she may request the Court to lessen the bail amount. At a bail hearing, the Court of law will decide on a suitable bail amount by evaluating the accused person’s:

However, the routine necessities for requesting a bail hearing can be puzzling. If an accused is not able to afford bail, it is likely he or she can also not afford an attorney to assist in filing the right motions with the Court.

Sometimes it can take several months before a criminal case goes to trial. As a result, without executing the bail system, prisons may be congested with individuals indicted but not yet convicted of any crime.

The accused will then have to pay the bail bondsman a fee of about 10% of the total amount of bail. Most bail bondsmen also insist that a guarantor or co-signer be present to sign a contract agreeing to cover the entire cost of bail in case the accused fails to appear in court. In specific cases, the bail bondsman may be willing to take collateral, for example jewelry, electronic or even a vehicle in exchange for a surety bond.

Also Read : What Are the Different Types of Warrants?

The bail bondsman is normally insured through a surety company. A surety bond is basically a promise made by a surety company assuring the authorities that the accused individual will certainly appear in court. If the accused person appears in court, then the court will return the bond and the surety company will either keeps all of it a percentage of the fee that was paid by the accused.

After receiving payment, the bail bondsman issues a surety bond on behalf of the accused person. It normally takes approximately 30 minutes to issue and post a bond, and the indicted will be released within few hours of the bond being posted.

If you have been arrested for a crime, or if you are a loved one and are confused and have questions about posting bail, don’t hesitate to contact a criminal defense attorney. Contact Paul J. Donnelly, P.A. now at 305-757-3331 and get the help you legally deserve.