Search Site
Menu
Home / Blog / What Are the Different Types of Warrants?

What Are the Different Types of Warrants? 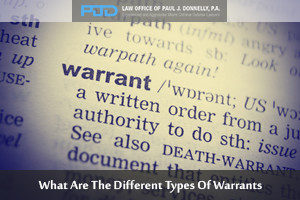 It can be scary to be in trouble with the law if you are unsure of what to expect. When it comes to the law, there is a lot that can be overwhelming to understand. One thing to keep in mind is if you are arrested, then be sure the police have a warrant.

What is a Warrant?
Let’s start by defining a warrant. A warrant is a writ that is either issued by a magistrate or judge. It clearly gives a competent officer the right to lawfully infringe an individual’s rights when it typically would be unlawful to do so.

If a particular crime was committed by an individual, and there is concrete evidence in that regard, then the state may issue an arrest warrant which not only authorizes arrest but also incarceration of that individual.

Sometimes arrest warrants may be issued simply because an individual in question failed to show up in the Court even though the crime he or she committed was petty—such as not paying the outstanding parking tickets.

Search warrants are usually court ordered by a judge permitting law enforcement to conduct a thorough search of your home and any other property you own for evidence of a crime. They can also confiscate any kind of evidence found.

Execution warrants are writs that permit the implementation of a judgment of death on an individual. This type of warrant involves lethal force as opposed to arrest as the ultimate result. These warrants are often confused with “license to kill.”

A legal official issues an execution warrant to any individual sentenced to death in a trial court, after a trial and sentence and after they have appealed and lost.

Share warrants are different from the other warrants because they are normally issued by public limited companies. These companies always have fully paid up shares. It is important to also note that private companies cannot issue warrants.

This document generally states that the bearer is eligible for the shares mentioned in the agreement. There is also a coupon book specifically for future payment of dividends.

Bench warrants are usually instant and on-sight. They are normally given to individuals who are in contempt of court, mostly because they don’t appear. These warrants are issued in either civil or criminal court cases.

Often, an individual who receives a bench warrant has done so simply because they deliberately failed to make an appearance from fear of the consequences.

When someone has a bench warrant against them, they can easily be stopped by law enforcement officers and put in custody until their hearing date where a new bail will be set followed by a new court date. Mostly they are considered a flight risk and are denied bail.

A Civil warrant is ordinarily issued in the small claims court during the filing of petty issues. If a warrant is made in an individual’s name, it explicitly compromises some of the rights, which he or she lawfully deserves.

If you have any kind of warrant in your name, contact the Law Office of Paul J. Donnelly, P.A. Call our office now at 305-757-3331 and we will do anything and everything we can to help and to discuss your legal options. Contact us today.