What You Can Do About Drug Possession Charges in Florida 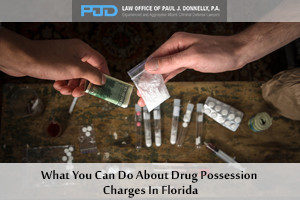 It is an offense to possess drugs in any form. Regardless of whether you are manufacturing, distributing, or selling controlled substances of any kind—drug possession charges in Florida come with stiff penalties. You might receive third degree felony charges, even if you only used drugs for personal reasons.

The drug laws in the state of Florida are strict and due to the heightened occurrence of drug possession since the 1980s, the laws have become tougher to control the wave of drugs in the country and in the state.

Drug possession charges in Florida account for many of today’s inmates in Florida’s state prison. The state of Florida has a deep history of drug addiction rates—including prescription drugs. Over the last ten years, these “pill mills” have sprung up in the state of Florida – more than other states in the country.

More than 126,000 individuals in Florida were arrested for drug offenses in 2013, indicating the increase in drug possession charges.

In a 1994 report released by the United States Department of Justice (DOJ), there was a distinct relationship made between the use of drugs and other crimes. With that 1994 data, it was evident that 65% of Florida robberies and 68% of Florida burglaries were committed by drug users at the time of arrest.

In the state of Florida, there were approximately 8,000 arrests for robbery and 23,000 burglaries in 2013. If we refer back to the statistics pulled and analyzed in 1994, we can also gather that the arrests and robberies that took place in 2013 were also linked to drug use.

In comparing prisoner arrest records in 1999 and 2000, the Florida Statistical Analysis Center (FSAC) was able to determine that many state prisoners had more drug crimes, felony and violent crimes than the prisoners placed in a state supervision program. Of the offenders sentenced to prison, 91% of them had a drug possession and only 22% of them in a supervision program were charged with a drug crime.

Although, some progress has been made in cracking down on drugs, they seem to continue to invade communities. But, even if you are not a drug addict or trafficker, and you have been caught with a controlled substance of some kind, you can still receive drug possession charges in Florida and face prison sentence. In such a case, you will need the legal assistance of an experienced criminal defense attorney so that your rights can be protected.

Florida drug laws also apply to substances like ecstasy, heroin, meth and other opiates. Drug possession charges in Florida for any of these illegal substances carry a likely prison sentence of 15 years and a fine of up to $10,000. If you possess the in excess of 10 grams of heroin, you face first degree felony charges, 30 years in prison and a fine of $10,000.

Work with a Criminal Defense Attorney

If you are currently facing any type of drug possession charges in Florida, contact a local criminal defense attorney for a free consultation to discuss the details of your case.

Review us on : Justia | Yelp