Search Site
Menu
Home / Blog / Do Jurors Have to Dress Up?

Do Jurors Have to Dress Up? 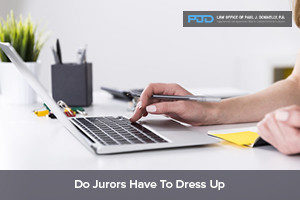 A recent court motion for a new trial alleges that by requiring a dress code, juries are not a representative sample of the population, and are not therefore a “jury of one’s peers” and not a Constitutionally adequate pool of jurors. The decision on this motion could affect criminal law trials in Miami and elsewhere throughout Florida.

Many courts at the state and Federal level have basic dress code requirements for jurors. Many of the requirements are designed to ensure that jurors look at least somewhat formal, by prohibiting sneakers, flip flops, shorts, and other casual clothes. In this particular case, which was in Federal court (or “United States” court), the policy indicated that “proper attire includes coat and tie for men and similarly appropriate attire for women. No jeans, polo shirts, or sneakers.”

Requiring a suit and tie is on the stricter side for many courts, but Federal courts, which often deal with major, high-level crimes, often maintain stricter rules for all participants in a trial, including jurors.

Under the Sixth Amendment to the Constitution, all Americans are entitled to a jury trial in the event of a criminal law trial. The Constitutional requirement indicates that jurors should be made up of the defendant’s “peers”, which generally means people living in the local community, representing a reasonable cross-section of residents.

Jurors Sent Away by Courthouse Security

According to the attorneys for two real estate investors who are accused of defrauding the United States and financial institutions in a mortgage fraud scheme, several prospective jurors were turned away from entering the courthouse to join the jury pool (the group of people who are prospective jurors in a case) because they did not adhere to the dress code.

The attorneys argued that the dress code is too strict. They stated that there are many individuals who would not normally be able to wear a suit and tie. They indicated that for economic reasons it may be difficult to afford a suit for some potential jurors.

Also, they claimed that other potential jurors may be dissuaded from serving because their religious or cultural beliefs require them to wear certain outfits that are not directly comparable to a suit and tie. And finally, they argued that some individuals wear sneakers not just to be comfortable, but simply because of medical reasons.

Due to the limits placed on the jury pool, the defense attorneys have argued that their clients must be given a new trial.

It is important to utilize the services of a criminal defense attorney who has your best interests in mind when it comes to the jury selection process, as well as throughout the rest of your case. criminal lawyer Miami with free consultation can help you navigate the complex world of criminal law.