Criminal Law: What You Need To Know About Resisting Arrest 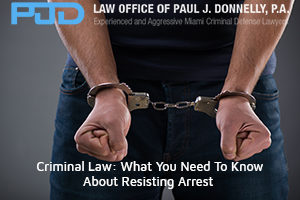 When you’re arrested, there are usually two ways things can go: You ask the police officers why you’re being arrested and allow them to take you into custody, or you forcefully resist arrest, because you believe the police do not have probable cause.

It is the second scenario that can get you in trouble, because prosecutors can add a resisting arrest charge to any other charges that caused the arrest.

In most states, resisting arrest is defined as any behavior or action you take that obstructs an officer from making an arrest and forces a police officer to use force to eliminate the resistance.

Resisting arrest can include:

Common Defenses In Criminal Law Against a Resisting Arrest Charge

If you are charged with resisting arrest, there are several defenses that you can use, including:

Your Right To a Legal Defense

After you’ve been arrested, you have the right to hire a criminal defense law firm to help answer the charges the state has brought against you. If you make a mistake and hire an inexperienced law firm, you may end up paying in legal fees and in a long prison sentence. Your best bet is to hire a firm with the resources to mount an aggressive defense, and that’s an apt description for the team at Paul J. Donnelly, P.A. Please contact us today for a free consultation about your case to see how we can help you.