Can an Entire Company be Indicted? 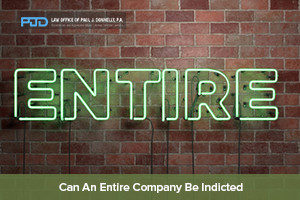 Did you know that companies can be indicted just like individuals? When a corporation is charged with a crime, the process may be a little different than when it involves an individual.

How Criminal Charges are Brought Against an Entire Company

While it is usually civil suits that are brought against a corporation, criminal charges can also be brought against multiple executives or an entire company. Corporations are considered legal persons, too; which means they can be sued and charged with crimes.

Corporations can be held criminally liable for the actions of their executives, employees, and agents. For example, companies guilty of insider trading may be charged with a crime as a whole, even if only the executives were the ones committing the crime.

How Does a Corporation Get Charged or Punished for Their Crimes?

As a whole, a corporation cannot be sent to jail. While the company can be charged with a variety of crimes by the state, only the individuals within that company who were guilty of committing the crime will go to jail.

The guilty individuals will come out during the trial involving the entire company. If no one is individually convicted, however, no one will go to jail.

How are Corporations Punished?

If no one is specifically charge with a crime from within the company, then the company can still be punished for their crimes. One of the most common punishments is a hefty fine.

The company may also be placed on probation through the courts, and a judge may be assigned to oversee the company’s operations during that probation period.

If a corporation committed a crime, then the victims are entitled to compensation. But, the criminal law does not compensate. Instead, victims would have to bring a civil lawsuit against that corporation.

If the corporation was found guilty in court, then this can increase the likelihood of a successful civil suit. Even if the company was found not guilty, victims may be able to file a civil lawsuit and win their case.

Is Your Company Being Sued? Call an Experienced Attorney

Corporations deserve a quality defense just like individuals. It is important for the reputation of your brand that you defend yourself against inflated charges. Often prosecutors will go for a more aggressive approach against companies, but your business does not have to risk its success.

The team of criminal attorneys in Miami at the Law Offices of Paul J. Donnelly, P.A. can help you defend your corporation. Call at 305-757-3331 today for a no obligation consultation.