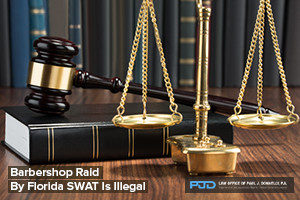 A 2010 SWAT raid on an Orlando barbershop, the Strictly Skillz Barbershop, has been declared illegal. The SWAT raid was conducted to check on barber licenses.

At that time about ten officers arrived in full SWAT gear, entered the shop, told patrons to leave, and then handcuffed the owner and two barbers. After about an hour of examining licenses of the three men, the barbers were freed and the officers left the premises.

Such raids are normally conducted when law enforcement believes there is serious criminal activity going on, such as weapons violations, drug trafficking, etc. If this incident seems like overkill, then you agree with the U.S. Court of Appeals for the eleventh Circuit in Atlanta.

The court found that the Orlando SWAT team activity was illegal and they noted that
Corporal Keith Vidler and Deputy Travis Leslie, who conducted the raid, did not qualify for the immunity to which they claimed they were entitled. Vidler and Leslie had offered that they had the right to undertake their actions due to the need to conduct a more aggressive action.

These actions were coordinated with the SWAT team, since a large number of the barbers in the shop had not cooperated previously with inspections, and the shop “serviced primarily African-American and Hispanic clientele.” The court ruled a similar incident involving the same law enforcement group illegal in 2007.

The court noted that the SWAT team action was a direct violation of Fourth Amendment rights, which prohibits unreasonable searches and seizures. Fourth Amendment rights are designed to ensure that we live in a free society and that we are able to go about our daily business, such as running a small business, free from fear that the government or law enforcement will, on a whim, step in unnecessarily. Police cannot search an individual or his or her property just because they have a feeling or notion of wrongdoing. There must be evidence.

It is important to guard your rights at all times. If you are arrested, along with ensuring your Fourth Amendment rights are safeguarded, your defense lawyer will also make sure that other important rights remain intact.

As an example, your Fifth Amendment rights, which include the Miranda warning which informs you that you have the right to remain silent when questioned by police, that you have the right to meet with your attorney and have him or her present when you are charged with a crime, and that anything you may say when interrogated can and will be used against you in a court of law, are a part of your right to avoid self-incrimination.

If you are arrested, the first thing that you should do is contact a skilled and experienced Criminal Attorney in Miami such as those at the Law Office of Paul J. Donnelly, P.A.. Your attorney’s job is to make sure that you are treated fairly and afforded all of the protections that the law provides. Never try to fight the justice system on your own.

The experience, skill, and knowledge of a successful criminal lawyer can be a major benefit when you are fighting for your freedom. Contact the criminal defense attorneys at Law Office of Paul J. Donnelly, P.A.. Call us today at (305) 757-3331 for a no-obligation consultation regarding your case.