6 Alcohol Crimes in Miami that Are a Real Buzz Kill 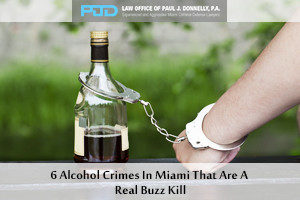 Everyone enjoys the occasional drink from time to time. As long as you are of legal drinking age, which is 21 in Miami and throughout the state of Florida, and you drink responsibly, there really isn’t anything wrong with it.

But what about when enjoying a few cocktails turns ugly?

Drinking doesn’t always turn into a crime. But when the right elements are mixed, a night of drinking can easily become an alcohol-related crime. And alcohol can literally and figuratively add fuel to the fire.

Even if you only got a little mad at that guy for checking out your girlfriend at the bar, you might now be facing assault charges. Or you thought you were perfectly fine to drive after those few beers, but you were then arrested for DUI. Alcohol may have clouded your judgment in these situations, making you less aware of what you were actually doing.

Here are six alcohol-related crimes in Miami, Florida that are a real buzz kill…

A DUI in the state of Florida is a very serious offense. Even if you are a first time offender, Florida carries severe penalties for those convicted of driving while under the influence of drugs or alcohol.

For a first time offense, which may not seem that serious to some, you could face up to six months of jail time. Plus, there is a mandatory fine of at least $500 and 50 hours of community service.

Also Read  : Driving Under the Influence in South Florida

You may think you are being cool, or helpful by purchasing or giving alcohol to an underage drinker. But in reality, you are breaking a serious law. In fact, this crime carries serious penalties.

Did you know that in the state of Florida, not only is it illegal to drink and drive, it is also illegal to have an open bottle of any alcoholic beverage in your vehicle?

Even if you are pulled off to the side of the road and the vehicle is not in motion, you can be found guilty of an open container violation if you have an alcoholic beverage with a broken seal in your vehicle.

You can be charged with disorderly intoxication if you are publicly intoxicated and found to be a danger to any other person or property in the state of Florida.

You can also be charged with this crime if you are found to be causing any type of public disruption or disturbance or even acting out irrationally. Disorderly intoxication is also considered a second-degree misdemeanor crime.

Rape may not seem like an alcohol crime, but drinking is an unfortunate contributing factor in many rape cases. The University of Florida Police Department reports that 75% of assailants in rape cases are acting while under the influence of alcohol, and 55% of victims are reportedly intoxicated.

These are sad and unfortunate statistics that indicate that alcohol can definitely be a contributing factor in rape crimes.

All too often, a verbal altercation can turn into a physical one with alcohol involved. In order to be charged with assault in Florida, you do not have to actually physically harm someone (that is considered battery).

The threat and intent by either word or action to harm another person, combined with the actual ability to do so, and creating fear in this other person, is enough for an assault charge in Florida, which is classified as a second-degree misdemeanor.

Now, should those threats become actual violence against another person, you can be charged with battery, which is a first-degree misdemeanor and punishable as such.

If you find yourself facing an arrest or charges of any alcohol related crime in Miami, Florida, you should contact an experienced and knowledgeable criminal defense attorney right away. Don’t delay, as time is of the essence in these situations.

Your criminal attorney will guide you through the entire legal process from the beginning, and they will work to ensure that your rights are protected every step of the way.

Also Read : What to Do When You Face Criminal Charges