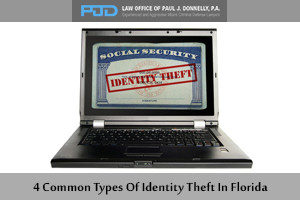 The situation is particularly bad in South Florida, which has been the country’s identity theft leader since 2010. And in fact, according to data released by the Federal Trade Commission (FTC), South Florida again topped the list for identity theft complaints for the fifth year in a row.

Here we want to break down the different types of identity theft crimes in Florida.

Use of Personal Details

Identity theft can occur in many different ways, but the use of an individual’s information for a gain, whether personal or financial is prevalent.

In fact the most common way the crime is committed is through financial ID-theft, which is clearly defined under the state’s Statutes Annotated § 817.568. This only happens when an individual uses another’s sensitive data to obtain money, goods, and/or services.

For instance, using the social security number, driver’s license, and name of another person to create a new bank account, attain government benefits or apply for a loan can be considered financial theft of identity. This can also include credit card fraud.

Criminal identity theft is the posing of another when apprehended for a particular crime. This can happen when an individual uses another’s sensitive personal information, including a driver’s license or any other form of identification. In this case, if an individual is arrested, he or she will easily pose as another. The crime is not different from identity cloning, which basically is the impersonation of another person in an attempt to hide an identity.

In such a situation, somebody will impersonate the victim and comfortably use his or her information so the crime will not reflect on their personal record. Warrants can be issued for the victim’s apprehension and he or she often could be punished for a crime that individual committed.

This often can go undetected for several years. Unlike financial identity theft, which can be noticed in just days, criminal ID-theft may go unnoticed until the victim is involved in a background check completed for employment or even a minor traffic stop.

Medical ID-theft is another form of deceitful use of sensitive personal data that could be difficult to realize and even harder to prove. This normally happens when a person uses another individual’s identity, including insurance information, strictly for medical purposes.

For instance, if an individual uses another person’s information to acquire medication during a medical examination, it could be a crime. In actual fact, medical identity theft is listed among the most dangerous forms of crime because it can result in incorrect information being added to medical report.

Children can also become identity theft victims. Using a minor’s social security number (SSN) to purchase a house or get a driver’s licenses can be considered ID-theft. A child’s personal information can also be used in synthetic ID-theft, which is a consolidation of several people’s information.

Identity theft is a crime, and if you are a victim, you have been violated and it is an uphill task to get the mess cleaned up. However, your speedy action of contacting the Miami FL criminal defense attorneys at Law Office of Paul J. Donnelly goes a long way in making sure you get all that is rightfully yours. Call our office today at 305-757-3331 for a free case evaluation.