3 Crimes Listed in the Constitution 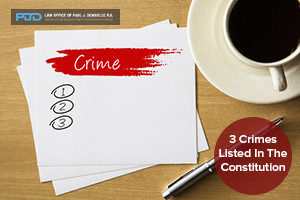 We all know the Constitution grants us freedom and rights within the United States. It even set up branches of government and order. But, did you know that there are only three crimes listed in the Constitution? These criminal offenses are charged as federal crimes.

Treason has been a crime listed in the Constitution by the Founders and for good reason: they wanted to protect the United States against anyone that attempted to help allies. You find information regarding treason in Article III, Section 3, which defines treason as:

It is one of the few crimes in the Constitution that also state that a guilty party may suffer from death if they are found guilty.

While most counterfeiting crime today have to do with paper currency, counterfeiting and distributing goods under another name can also be punished under federal law.

Not All Federal Crimes are in the Constitution

There is an array of crimes that fall under federal law. While they are not listed in the Constitution, they are still tried and convicted in federal courts. From drug trafficking to conspiracy, there are numerous crimes that could put you into a federal prison.

If you are arrested for a federal crime, you still have rights. But, you need to hire an attorney that understands the complexity of federal courts and can represent your case. Contact the Law Offices of Paul J. Donnelly, P.A. today for a free consultation.

Our Miami FL criminal defense attorneys offer no obligation consultations and can assess your case even on an emergency basis. Don’t risk using an inexperienced attorney for your federal charge, call us now.