Search Site
Menu
Home / Blog / What Happens if I Reenter the U.S. After Deportation?

What Happens if I Reenter the U.S. After Deportation? 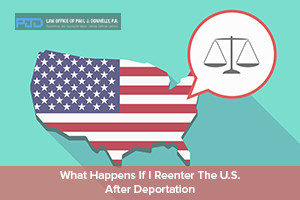 The term “Illegal Reentry” is commonly misunderstood. According to the “Immigration and Nationality Act”, it is not just about reentering the United States after deportation. Illegal reentry occurs any time you enter the U.S after:

What Happens if You’re Arrested?

If you are arrested for illegal reentry, the penalties are severe. They could range from severe fines to imprisonment and fines, etc. If you reenter the country and already have a criminal record (even just a record with misdemeanor offenses) or you have been convicted of drug crimes you could be imprisoned for up to ten years.

The Immigration Consequences of Illegal Reentry

While you may feel you were removed or deported due to unfair circumstances, do not attempt to reenter the country. Doing so could ruin your chances of having that decision overturned.

Do You Still Have Rights if Arrested?

If you are arrested for illegal reentry, you will be given the option of a public defender or hiring your own counsel. You are still entitled to a criminal hearing, where you can plead guilty or not guilty to illegal reentry (and any other charges).

What If I Need to Reenter?

Never reenter the United States illegally. Instead, contact an immigration attorney to assist you with a legal reentry. If you have been arrested for illegal reentry, contact a criminal defense attorney Miami right away.

The Law Office of Paul J. Donnelly can help you with your illegal reentry arrest. Whether you were deported or your application for entry was denied and you entered anyway, our attorneys can help. Contact us today for a consultation by calling 305-757-3331 now.