Search Site
Menu
Home / Blog / What Are the Legal Consequences for Protesting in the Streets?

What Are the Legal Consequences for Protesting in the Streets? 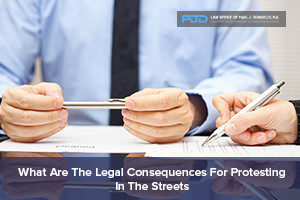 These days you cannot turn on the news without hearing about another public protest. From Ferguson to Berkley to New York, you see hundreds of concerned citizens sharing their opinions, speaking their minds, and of course, blocking off streets.

While blocking streets and shutting down freeways may help bring light to your cause, it could also bring some serious legal consequences.

What are the Legal Consequences of Blocking Streets and Shutting Down Freeways?

Protestors that are disrupting the flow of traffic may be doing more than just making other drivers late for work; they could be violating the law. While the charges are up to the protestors in that particular county, they could bring a few charges, including:

No Charges at All – Typically if a protest is peaceful and the disruption is short such as blocking traffic just to cross the street, police are unlikely to make arrests or cite any protestors. If, however, some protestors choose to leave the pack and remain in the middle of the streets, those protestors could be arrested.

Assault – As seen on the news, some protests can lead to violence. Any threats to motorists or physical altercations that lead to blocking traffic could result in an assault charge, too. While most police will not arrest and charge protestors, they will if protestors become violent or harm others during their demonstration.

Disorderly Conduct – When protests start to disrupt the peace of the public, a protestor could face charges of disorderly conduct (read more about misdemeanor charges). Many protests the past few weeks on the news have resulted in a few arrests for disorderly conduct, though most of those who were arrested were never officially charged.

Were You Arrested at a Protest?

If you were at a protest and were arrested, you need the assistance of a criminal attorney (read more about what to do if you are arrested in Miami). In some states, police have used multiple charges to keep protestors off the streets, which may result in you being charged with more than you should.

A skilled Miami criminal attorney can help you with your case and ensure your peaceful protest is not used as an example. Contact the Law Office of Paul J. Donnelly today for a case evaluation by calling (305) 757-3331.