Search Site
Menu
Home / Blog / Is There a Three Strikes Law in Florida?

Is There a Three Strikes Law in Florida? 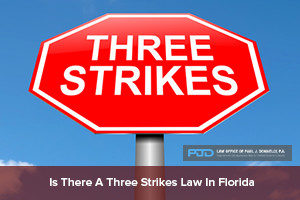 In the state of Florida, first time offenders are often shown some form of leniency by the courts. But, career criminals are not. The three strikes law was established in multiple states, often referred to as the habitual offender law. State governments established mandatory, harsher sentences for criminals who have been convicted of three or more serious crimes.

There are already twenty-four states that have some form of three strikes law, and Florida is one of them.

How the Three Strikes Law in Florida Works

Every state is different in terms of what is considered a felony and what sentences will be imposed upon those with three criminal convictions. These sentences can range from a few years in prison to a life sentence.

But, in order for the state to use the three strikes law against you, the state’s prosecutor must first show that your conviction meets the five strict requirements:

1. You have been convicted of two felonies before.

2. The felonies were two separate events, as well as the third. If the three are tied to one another or part of the same arrest, they are not considered eligible for the three strikes law.

3. The offense being charged is a “violent” offense.

4. The other offense was within five years of being convicted of the first and second eligible offenses.

5. None of the accused prior convictions have been overturned or pardoned.

In most cases, the judge will determine whether they think the individual will offend again. If he or she feels the individual is “high risk”, then he or she may impose the mandatory maximum sentence to ensure the offender does not commit the same crime. But, if the judge feels it is an isolated incident, he or she may use a more lenient sentence.

If you have already been convicted of two separate felonies, you need the help of an experienced Florida three strikes criminal defense lawyer Miami.

The three strikes rule can impose life sentences, even for crimes that would not typically result in such a harsh penalty. The team at the Law Office of Paul J. Donnelly will help defend your character, prove that you are not high risk, and possibly even have your case dismissed altogether.

You cannot risk going at this alone or with an attorney that is not experienced in violent crimes. Contact us today for a no obligation consultation by calling 305-900-5460 now.