How Serious Are White Collar Crimes? 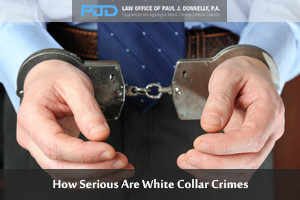 Who Really Commits White Collar Crimes? A white collar crime is a universal term used to refer to financially driven crimes that are non-violent. The term was derived for the notion that they were characteristically committed by business executives who put on a white shirt and tie.

However, the truth is individuals from just any kind of background can commit this type of crime. You don’t have to be a business executive to bribe someone or even blackmail an individual. The same applies to counterfeiting, identity theft and forgery.

All in all, white collar crimes are often committed by professional individuals who have direct access to resources to commit such crimes. They are able to use their special professional skills, access, and opportunities to swindle businesses, individuals, and even governments.

Since the white collar crimes are financially motivated, they are not necessarily associated with crimes against personal property, civil rights or vice crimes, or even organized crime, and immigration.

What are the Types of White Collar Crimes?

1. Tax evasion. This is listed among the most common white collar crimes. Defending oneself against this kind of crime will basically involve sorting through years of financial archives and documentation of your situation.

2. Buying or selling stocks. Crimes that involve stocks such as stock scam, securities scam, and even insider trading have landed so many high profile individuals behind bars. The accusations could include selling or buying stocks simply because an individual possesses the sensitive information of buying or selling.

4. Identity theft. This crime can be prosecuted under the Computer Fraud and Abuse Act if the data was obtained on a computer. But then again, identity theft was around even before the Internet.

Thieves have always dug through the trash just to get bank account numbers or sometimes tricked people into revealing their sensitive personal information through the phone. The thieves then use this information to obtain credit cards and several other financial benefits.

1. Exaggerating the amount of medical treatment in order to obtain extra cash from insurance companies. Some healthcare providers involved in such have always defended themselves by saying they did it to assist the patient.

For instance, the treatment that the patient received was not supposed to be covered by the insurance so they listed another different procedure so that it would be covered.

2. Untruthfully reporting thefts so as to collect the insurance money.

3. Reporting damage that was not even caused by the accident. This is common in car accident cases.

4. Faking an injury from an accident for medical benefits.

5. Faking a death to get life insurance.

Most of them are investigated by major government agencies like the Securities Exchange Commission (SEC) and the Federal Bureau of Investigation (FBI). It is not unusual for an individual to replace the money they stole, to pay thousands of dollars in fines, and also to pay victim restitution.