Search Site
Menu
Home / Blog / Hot Under the Collar: Facts about Corporate Crime that Will Shock You

Hot Under the Collar: Facts about Corporate Crime that Will Shock You 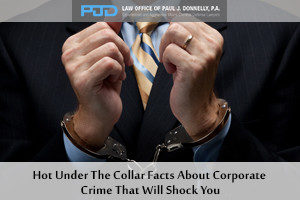 Many believe that street crime is a very big problem in this country today. However, there are those who believe that corporate crime is far much worse.

Compared to all the street crimes put together, corporate crime is far more damaging to our society. In fact, when you try to compare the bodily injuries inflicted and dollar amount lost as result of both crimes, corporate crime tops the list.

A Little Hot Under the “Collar”: Crippling Billions. According to FBI, the total dollar amount lost to street crimes every year is roughly $4 billion. Well, this amount is chump change compared to some of the large, infamous corporate crimes, like the Enron scandal.

The country’s taxpayers incur losses totaling up to $300 billion yearly from corporate health care fraud alone. And let’s not forget the loan and savings fraud of the nineties when a staggering $500 billon of taxpayers’ money disappeared. This crime was also termed the biggest white-collar crime in recent history.

In fact, the FBI revealed that about 15,000 individuals are killed in street crimes every year. Now, try and compare this to the 55,000 who die annually because of corporate criminal negligence. These are individuals who die from environmental pollution, occupational diseases, contaminated foods, and even hazardous products.

Is This Justice? Several years ago, the Department of Justice introduced the deferred prosecution agreement. With the help of this agreement, it is easy to bring charges against a particular company and tell the executive staff that if they stay out of trouble for the next several years then charges will be dropped. Well, this makes you wonder whose side they are on.

In the event of a corporate crime, it is vital that you know your rights and get as much information as you can to know whether you are wrongly charged. It is also highly advisable that you seek the services of an experienced Miami criminal lawyer.

At the Law Office of Paul J. Donnelly, P.A., we are ready to stand by your side to the end just to make sure the charges placed against you are dropped or reduced. Call us today at (305)-757-3331 for an absolutely free consultation.