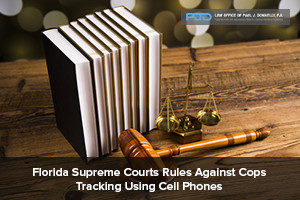 Numerous news sources report that the Florida Supreme Court has ruled police must have warrants in order to monitor their cell phones and access tracking information from them.

The court ruled in favor of a man, Shawn Alvin Tracey, who was arrested in Broward County in 2007. Police had tracked Tracey via his cell phone. This was done by determining Tracey’s location by accessing information from his cell based on where recent calls were made. When police searched the suspect’s car they found a kilogram brick of cocaine hidden in a spare-tire well.

The vote was 5-2. The majority opinion noted that Tracey’s Fourth Amendment rights had been violated. The Fourth Amendment to the U.S. Constitution protects individuals from unreasonable searches and seizures.

In the 46-page majority opinion, which was composed by Chief Justice Jorge Labarga, it was observed that due to the fact that such a vast majority of those in the U.S. depend upon their cell phones for communication that the practice of tracking them could easily invade one’s right to privacy.

It was also noted that the police should have gotten a warrant based on probable cause in order to use the location information. Police had previously gotten a court order that allowed them to record phone numbers that came through Tracey’s phone.

Your Rights Are Important

If you utilize the services of a criminal lawyer miami, one of the things your attorney should do is investigate as to whether or not any of your rights were violated in the police investigation, during your arrest, and in subsequent questioning. The fact is a defendant is considered to be innocent until proven guilty and law enforcement must prove their case while making sure that they do no comprise your constitutional rights.

The new Internet and wireless world in which we live and work is filled with technology that can be used to make our lives better. On the other hand, technology can also be used and manipulated in new ways by government agencies that can potentially compromise our rights. Because there are so many new opportunities for law enforcement to collect information on those they suspect of committing a crime, it is essential that someone charged with a crime hire an attorney who is knowledgeable of the law, technological advancements, and techniques that may be used to illegally monitor or retrieve information.

What You Should Do

If you’re charged with a crime, you need a criminal lawyer who will be aggressive in your defense, making sure that you receive a fair and impartial trial. Your lawyer should be invested in your defense, and, also, they should be passionate about the fact that you deserve a trial that meets fair standards.

If police, prosecutors, or the judge has violated your rights in any manner, then your criminal defense lawyer must be willing to address such issues.

For more information on your constitutional rights or in order to secure an experienced and dedicated Miami criminal lawyer, contact The Law Office of Paul J. Donnelly, P.A. We will have you meet with one of our skilled and experienced attorneys and discuss your case as well as any possible options.