Search Site
Menu
Home / Blog / Are You Really Safe from Crime in Miami?

Are You Really Safe from Crime in Miami? 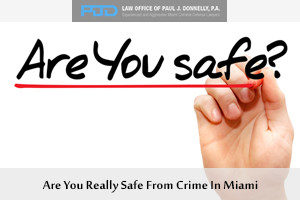 Miami is a beautiful city located in South Florida. It is known for its picturesque scenes and warm, sandy beaches. But it’s also a dangerous city. Crimes in Miami range from murder to robbery and assault. What are your chances of becoming a victim in Miami?

Miami’s total population is 417,650. While Miami is 4% safer than other cities in the United States, individuals have a 1 in 84 chance of becoming a victim of a crime in Miami alone.

As of 2013, the following violent crimes took place:

Did you know that there are 1,377 registered sex offenders living in Miami? It’s important for families and residents in the Miami area to lock their doors and windows at night, secure their vehicles, and even walk around town with a family member, loved one or friend. Traveling in numbers can help individuals reduce their risks of being involved or being a victim of a crime.

If you’ve been the victim of a crime or you have been accused of a crime, it’s important to discuss this with an experienced and reputable criminal defense attorney as soon as possible. Time is of the essence when it comes to your freedom and safety.

Secure your future today by contacting the criminal defense team at the Law Office of Paul J. Donnelly, P.A. at 305-757-3331. We have experience fighting for rights of victims and defending those accused of federal crimes throughout Florida. Call us today for your free case evaluation.